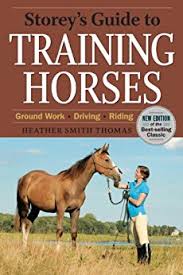 This is a concise, yet comprehensive text on the fundamentals of all aspects of training a horse, from imprinting a newborn foal to fixing potential problem behaviors in an older animal.

Clearly articulated and well illustrated, my only difficulty with this book was that it was slightly repetitive; often the “sidebar” boxes interspersed throughout the text were disruptive to the flow of ideas and didn’t usually offer anything different from what was being said in the main body.

However, it also provided explanations of some of the basics that seem to have become glossed over in my horsemanship education. Having spent my whole childhood and teen years taking riding lessons but never owning a horse, and now doing much of my current training with my leased horse on my own (with a weekly lesson to give me some structure), I’ve missed out on being specifically taught skills like longeing and other areas of groundwork. This book does a great job of explaining those concepts and connecting them with related skills used while riding the horse, and has been able to fill in some of the significant gaps in my knowledge.

But perhaps the most valuable part of this book for me was, oddly, an articulation of the concept of dressage. Growing up as an English rider who did hunt seat equitation, in my mind dressage existed in an entirely different (and, if I’m being honest, boring) world from what I was doing. It was just the part of the Olympics that I wanted them to stop covering and move on to the exciting jump stuff.

As I began my foray in to Western riding and reining about a year ago, I did somewhat grasp the similarities of reining and dressage. But I had no idea the new depths of training and understanding that I would begin to develop through learning from Dunnie and my wonderful trainer. I’d always been taught to ride in a style of figuring out how to get whichever school horse I was on to participate in what I was trying to do with at least a basic level of functioning, and then practice that until I could look pretty doing it. But the description in this book of dressage (of all things!) neatly sums up the approach that I’ve finally come to know about and take in working with horses:

“The concept of dressage means different things to different people: it can encompass basic training, harmony between horse and rider, perfection of the gaits, development of a horse’s physical and mental ability, and horse ballet. The term is often misunderstood to mean a type of riding that can be performed only in a certain way and one that is just for English riders.

The term comes from the French word dresser, ‘to train,’ and dressage is the kind of training that goes beyond simply breaking a horse and making him willing to carry a person on his back. Dressage is the art of improving a horse beyond this stage, making him more agile, willing, easier to control, more pleasant to ride, more graceful, and better balanced. It involves a type of consistent horsemanship that is necessary for developing perfect obedience and perfect lightness and agility.

Dressage teaches a horse to understand your aides more fully and to become more responsive. Dressage is therefore beneficial for any horse — it will help him become well rounded in his education and less apt to become spoiled or one-sided. A little dressage makes for a better-trained horse. A broader experience of dressage not only trains a horse but also develops him physically and mentally so he is truly ‘one’ with his rider, able to understand whatever the rider asks of him and physically competent to perform it. “

Funny enough, as I’ve come to recognize this approach and see the potential it has for creating an incredible working relationship between horse and rider, I’ve always attributed it to the Western sensibility. To working horses that need to have these skills to get the job done, rather than pampered, gleaming show horses prancing around the ring to no discernible end. Thanks to this book, I now have more of an appreciation for the worth of a discipline that I had previously dismissed (although I’m still not sure I’ll be in a rush to go out and watch it).