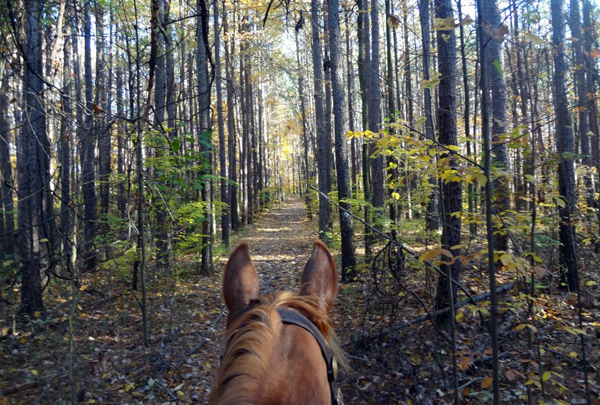 As promised a couple of weeks ago, Urban Equestrian now has a new look! The blog just turned four years old this November (which also marks four years back in the saddle for me), and I thought it was about time for an updated design.

Last weekend, Dunnie and I also got a new look at the world as we went on our first trail ride together. My trainer brought us, along with six other girls that I ride with and their horses, out to 7IL Ranch to practice riding on trail and see if we’re interested in doing some competitive trail riding.

Dunnie and I did a trail class at the SHOT show we went to in September, but that was different; it was trail obstacles laid out in a ring. Back in college, I did one competitive trail ride that was actually on outdoor trails on a lark (in an English saddle) and really enjoyed it, so I’m interested in doing it again.

Competitive trail riding is a set of obstacles spread out along trails, maybe about a mile apart. They can include elements such as riding over a bridge or through a stream; opening, going through, and closing a gate; riding up to a mailbox and taking something out or putting something in; or riding up a hill without letting your horse break into a faster gait than a walk. The competitors ride through the trails and are judged at each obstacle; there are three levels of difficulty available at each stop, with more points awarded for the higher difficulty skills.

This weekend on the ride, we didn’t encounter any man-made obstacles, but we did find some of the ones that crop up naturally on trails: fallen trees to jump over, ditches that make the trail narrow and steep, branches to avoid (or to barrel through, oblivious to the fact that you have a rider on top of you, whichever).

I was interested to see how Dunnie would react to being out in the open. During the SHOT show, he had reacted poorly to the trail class and the ranch pleasure class being outside near a wooded area, but I had to chalk some of his being so keyed up to all the excitement of being at a show as well as my own contribution in the form of performance anxiety. I predicted that he would be excited to be out on the trails and might be a bit alert, but I also knew that since I had no goals other than to relax and enjoy the ride, I was confident I could keep him calm enough for that.

Right off the bat when we got the horses out of the trailer on the open field in the picture above, he was super alert — but that was because next to that field was a pasture full of his favorite thing in the world, cows. As I trotted him around trying to get a feel of how the open space would affect him, he kept craning his head back around to look at them like a dog that wants to chase a squirrel. He cracks me up.

Once we got away from the cows and out onto the trails, he was able to focus a bit more. At first, all the tall grass along the side of the trail was a potential threat that required his complete vigilance. Aware that when he does shy away from scary things, it’s a lightening-fast move where he drops his shoulder — the speed and the sudden imbalance being a tricky combination to stick with as a rider — I had to consciously work to remove anticipatory tension from my body. Once we left the more open trails for the narrower, wooded ones, he relaxed a bit of that vigilance. I think that was mostly because there he had something to think about, being forced to negotiate the footing more attentively. 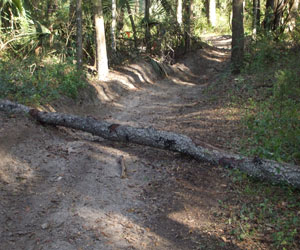 His main concern for the rest of the ride was whether the lead horses in front of us were getting too far ahead for his liking. My tendency in a trail ride is to want to be in either the front or the back. If my horse isn’t a leader, I like to ride all the way at the back so I can keep track of everyone (this is probably a holdover from hiking with a bunch of kids in my camp counselor days). Dunnie would certainly have enjoyed being the leader, but would have quickly gotten out of hand had I let him. He would not tolerate being towards the back, and even when he was comfortable in the middle of the pack, we had to be cognizant of train getting too spread out or he’d start to get charged up.

Overall, we spent pretty much the whole six-mile ride in an energized, but contained, trot. At first I kept trying to bring him down to a walk, but I quickly realized that this small release of energy would keep him happy, whereas trying to tamp it down completely might result in an explosion later on. Luckily, his trot is very easy to sit. And even more luckily, he was willing to communicate with me.

Often when we start our ride in the ring, I have to take a few minutes to get his attention. He’s excited or distracted by other horses, by the wind, or some birds, and I need to say, “Hey, listen to me now. We’re gonna do stuff.” Since we’re in a ring and in familiar surroundings, the distracting things quickly recede and after a few minutes, he’s ready to give me his attention and get to work.

The big question for me in taking him out on this trail ride was whether I’d be able to get his attention in a more chaotic, more interesting, potentially scary out-in-the-open situation. I remembered the helplessness I felt at the SHOT show when it seemed that I just couldn’t get through to him. Ultimately, he came back to me for the afternoon classes, but those had been back inside the arena, not outdoors like the morning ones. But since then I’ve continued to develop as a rider and every day I feel more confidence. And so much of the detailed work we’ve been doing — especially on flexion — has focused and refined our communication. I was extremely pleased to see that even though he clearly just wanted to run amok through those trails — to charge ahead of everyone else, freak out about figmentary predators in the grass, and probably charge back to the trailhead as quickly as possible to bite some cows on his way out — that he was willing to listen to me when I said that we weren’t going to do any of those things.

I was excited to go on that trail ride because being out in nature is restorative and calming for me. I love hiking and it can only be made better by being on horseback. I didn’t exactly get the relaxing ramble I was hoping for, but what I got was much, much better. I got to see that Dunnie trusts me and that I can trust him. 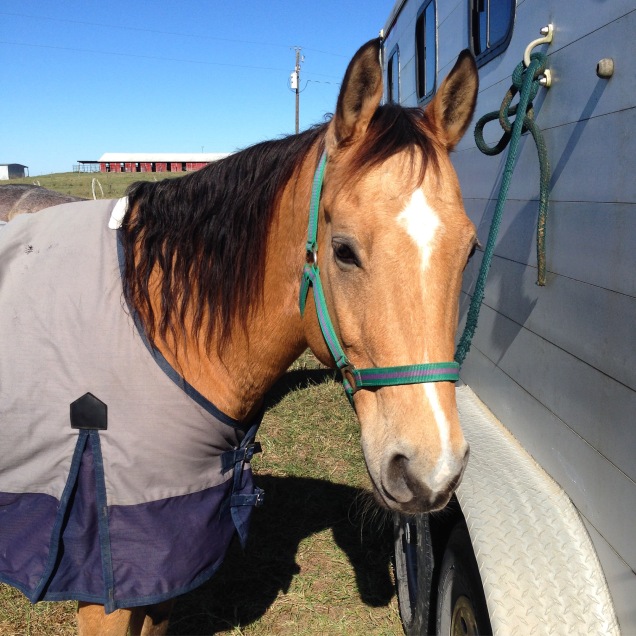 Returning to riding today after the long break for the holidays finally makes everything feel back to normal again, like I’ve returned to a rhythm of regular life. It was a long, slow, restful holiday time this year, which is just what I needed. I could really feel the good it has done me today during my lesson; I felt supple and focused.

One thing I’ve learned is that physical activity the day before riding makes a huge difference to my muscles. Even if I don’t have time to stretch or warm up much before my lesson, having worked out the day before means that I will get warm more quickly at the start and have so much more energy and flexibility throughout.  So it looks like more exciting Friday nights at the YMCA for me. I’m trying to be a bit more disciplined about my exercise schedule these days. Before, I just went whenever I had some free time and as long as I was going semi-regularly, that was enough. Now I’d like to be on more of a training schedule for riding and in (premature, but I’m so antsy for it) anticipation of softball starting up again in the spring. My ideal is to be going two days a week. One day I’ll do cardio (a combo of running/elliptical/bike) and weights to target muscles I use on the horse (mainly core stuff). The other day I will go swimming for however many laps I can handle.  I went last week and was able to do twelve. It’s been a long time since I’ve done any swimming, so I’m sure I’ll build up from there. I felt incredible after those twelve laps, though.  I’ll also keep going to yoga once a week to stretch everything out. Those things should put me in good shape for my approximately two riding lessons a month. Or, I could forget all that other crap and just ride a horse every day. Then I’d be in amazing shape.

But for now, I’ll just have to be thankful for what I’ve got. Today’s lesson was great. I was really on and so was my horse. I rode Summer again, who is just such a sweet, pretty girl. When I went to get her in her stall and she looked at me, ears perked on top of that perfect little Arabian face, I actually caught my breath for a moment at just how pretty she is. Her disposition is so lovely; she doesn’t have that mareface bitchiness even when she’s displeased enough to put her ears back. But she’s no dummy. It’s not a vapid sweetness that shines out of her soft brown eyes, but a sort of calm intelligence that makes her easy to trust.

There was a moment today during the lesson when I had to put that trust to the test. We were standing still in the middle of the ring as Hannah explained something to us when a huge boom of thunder sounded, spooking all the horses. Summer leaped forward a few steps and then stopped; everyone dismounted and stood around stroking their horses’ necks while we waited to see if the storm would continue.  When we got back on a few minutes later and started trotting again, she was understandably skittish. So was I, tense with wondering whether there’d be more thunder to set her off. I was doing the thing I do where I get grabby with the reins and lean forward with my upper body and drive my mount crazy, and Hannah suggested that I needed to give Summer a little more rein and show her I trust her. It wasn’t easy…but it wasn’t as hard as it used to be, either. I find lately that in all areas of life, I’m regaining this control of myself wherein I’m able to just be ok. I can let go of anxiety and have confidence in my capability to handle things. So I sat back, lengthened my reins, and squeezed her forward. We trotted the long side of the ring with her being a little spikey and me half-halting her as gently as I could while focusing on breathing and keeping the tension out of my muscles and my mind clear of thunder anxiety. And just like that, she relaxed. As we rounded the turn I felt her whole body change. Her head dropped and her back unwound, her movements became smooth and she was her game, responsive self again. It’s amazing how that works. I showed her trust, and she trusted me back. That’s the thing with horses: if they think that you think that everything is ok, they are likely to think so, too.